The ravenloft expansion is part of the mod 14. And is a high level (70) adventure area. The story takes place in the Borovia village.

On a lonely road, travelers encounter a strange caravan. Brightly-painted wagons are circled around a blazing campfire, where colorfully-dressed people are dancing, singing and drinking around the fire. They call themselves Vistani, wanderers and lovers of life who hail from the valley of Barovia. Travelers are welcome at the camp, offered food and drink by the Vistani, and are soon drawn into a tale of their homeland.

In Barovia, every monster you encounter has a chance of leaving behind special rewards; Tarokka Cards, wanted posters, as well as rare random gear drops. The Tarokka Cards and wanted posters are used for the Barovia Monster Hunts. 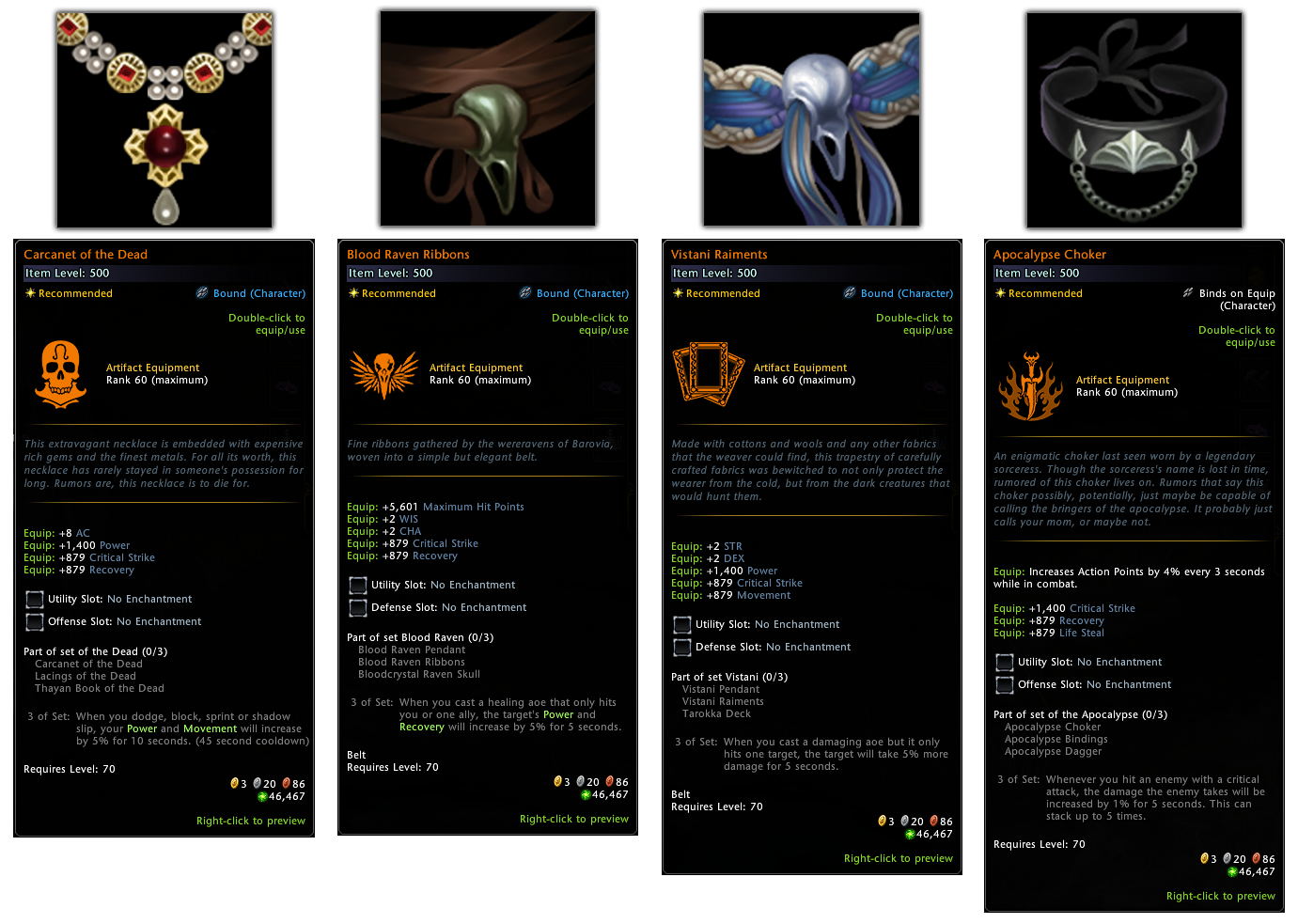 While you travel the land, you will gather the currencies needed to unlock the campaign, as well as buy items in the Campaign store. In the store, we have introduced four new Artifact Equipment sets, with three of the new sets using some of our older artifacts: the Bloodcrystal Raven Skull, the Thayan Book of the Dead, and the Apocalypse Dagger.

Hunts Again, but Not Really

Like I said, don’t let yourself discourage by the term “Hunts”, because the system did receive some favorable changes in key areas. One thing that didn’t chance though is that you still have to farm the first set of lures from mobs in the zone. Mod 14 lures are called “Wanted Posters” and drop from all “stronger” mobs in the Barovia adventure zone. Stronger mobs are those that have six health bars (Witches, Berserkers, Vampires, etc.). Posters might also drop from other mobs, but if they do, it’s a tiny chance only. One minor upgrade to earlier Hunts already is that the posters are an auto-pickup. So you can’t really miss them. While you’re slaying mobs and doing your dailies, you’ll automatically get a few over time. I haven’t fully tested by the way whether certain mobs only drop certain posters. But right now I’d say it’s fully random, because I definitely got a “Bolgera” (Scarecrow Hunt) poster from a Druid mob the other day.

Which brings us to the first major change, because the Wanted Posters are fully sellable on the Auction House. This was a request of the community and while the devs emphasized that they liked the restrictions of certain Hunt items so that players had to interact socially to trade them, they’ve reversed course for Mod 14. So if you don’t feel like farming yourself, you will be able to buy the posters you want with Astral Diamonds. It obviously also means that you can go out, farm posters, and turn them into profit much easier.

2-Star and 3-Star posters just like in Chult can only be obtained from 1-Star Hunts, but there is no longer a pyramid to climb. Hunts just drop random posters of the next tier and there are actually multiple 3-Star targets this time.

Madame Eva and Her Cards

The actual process of hunting also changed by a lot. Everything now takes place in private instances and you can choose to add challenge to Hunts for additional rewards. All starts in Madame Eva’s tent in the Vistani camp. Any player that owns a Wanted Poster can enter and start a Hunt. Additional challenge and rewards can be added by playing up to three cards from your Tarokka Deck Box. If you’re in a group only the leader can do that. We’ll go over all cards and effects in a different article in the future by the way. For now just know that you can earn extra Astral Diamonds, gear pieces, refining points, or campaign currency. It’s really cool because that way you can do less Hunts, but make them count. We’ve long called for such a system for dungeons and it’s at least encouraging that the devs now test it on a lower stage.

Depending on the quality of the card the Hunt however can become quite challenging. So you might want to bring a group, making this much more of a social and group feature than Hunts in M12/13. After picking your target and Tarokka cards, you zone into a private instance that looks exactly like Barovia. The target will appear on three out of thirteen possible locations. Madame Eva gives the players some hints, but you have to figure out the locations yourself. It’s a nice puzzle, but most of the time the description is fairly telling. We do however have a map for all you lazy folks that links all the tips to the corresponding locations. Then you basically just have to hunt your target down and kill it gradually. You have 20 minutes to complete a Hunt, but usually shouldn’t run into any trouble.

One more thing about the hunt map: It’s fully populated with standard mobs. Usually you can avoid them while tracking your target, but some Tarokka cards extend their aggro range and add HP and damage. So those can actually become a factor in the Hunt. Dying does not fail or reset the Hunt. As long as you stay within the 20 minutes it’s all good.